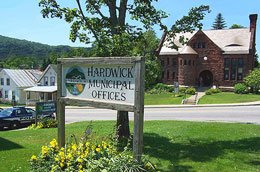 The Village Restaurant in downtown Hardwick is now under new ownership and management.  We would like to welcome Roger Howard, Edie Menard, Patti Williams and Lynn Delanchaliere to the business community!  If you haven’t already, stop by and enjoy a meal at the ‘new’ Village Restaurant!

Hardwick, a town of 3,000 population, is in the northwestern corner of Caledonia County. The township comprises about 23,040 acres and covers an area that is six miles square. The township was chartered in 1781 to Danforth Keyes and a group of his associates, some of whom were residents of Hardwick, Massachusetts. Those associates apparently held sway in the naming of the new town, which was initially mapped within Orange County. Mark Norris, the town’s first permanent settler, established his pitch on May 16, 1788, at a site not far from the historic Bayley-Hazen Road, which runs along the town’s northern boundary.

The county designation was changed not long after the town was officially formed at the first town meeting held in Norris’ home in March 1795. Hardwick is bordered by the towns of three different counties. Greensboro is to the north in Orleans County, Woodbury is to the south in Washington County, and Wolcott is to the west in Lamoille County. Vermont 15, a paved state highway, links Hardwick to the county seat in St. Johnsbury 21 miles to the southeast, as well as to Burlington, which is the state’s largest city, to the northeast. Vermont 14 runs south into Washington County and the state’s capital city, Montpelier, which is 27 miles away. 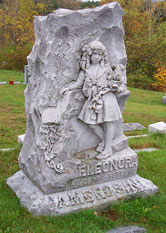 Hardwick has a rich and colorful history. The town grew quickly after the first town meeting, but it was a difficult life for the first families who were the first to till the soil upon which they labored long hours. Some families lived in homes that were little more than shacks with dirt floors. They grew their own vegetables and there were only a few cows to provide milk. Eventually, there were grist mills built and the settlers grew wheat.
Hard-won comforts prospered into the rough and tumble affluence of a mining town as Hardwick became a center of Vermont granite mining. Fine artisans, used to the soft and fluid lines of marble carving, now plied their trade in granite.

Today’s Hardwick echoes this diverse heritage in its many Victorian buildings. Visit the Historical Society’s Museum at the Railroad Depot; stop next door at the Townhouse (once The Hardwick Opera House) to see one of Vermont’s painted stage curtains; take a walk on our swinging bridge and pick up a book at the local bookstore. In-town restaurants offer a variety of dining options, from homestyle cooking to pizza and eclectic organic cuisine.

For more information about Hardwick, visit the Town of Hardwick website. 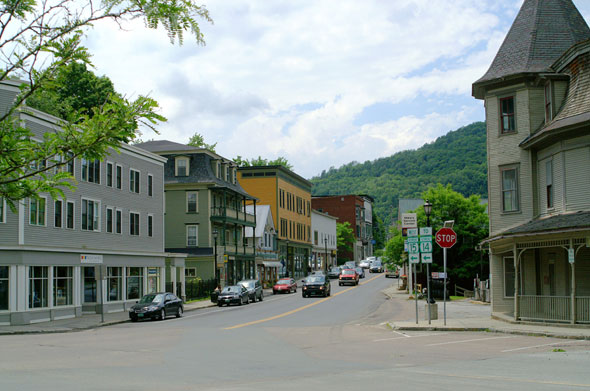